So, my 4th installment of “7 Gigs in 8 Days: A Week in the Life of being Kid Kazooey” concerns my interview and performance on WFHB’s weekly program, Local Live.

Kid K in the Live Studio, just before going on air with WFHB’s Local Live.

If you don’t already know, WFHB is Indiana’s greatest independent, volunteer powered community radio station (which happens to be celebrating it’s 20th anniversary this year! ). This radio station has been very berry good to me! February 13, 2013 was no exception. The ever hip, bright and sweet Nicole O’Neal, Local Live Coordinating Producer, and I had great time in the Live Studio and here is the interview in it’s entirety! 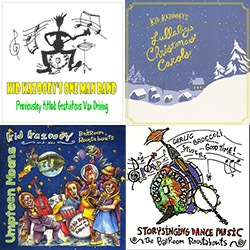